Interesting Things I Learned from the Men in My Life

I thought I'd share a couple of things I've learned recently from the men in my life. You might totally relate!? 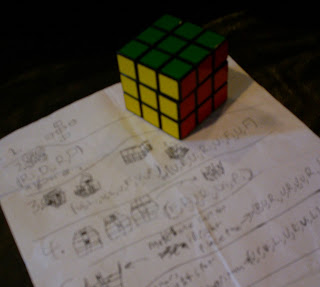 Did you know that there are mathematical formulas that you can use to solve a rubix cube?? Here's a picture of the cube and my 15 year old's notes on how to solve what  I always thought was an unsolvable puzzle. In fact, the only way I thought you could solve these toys from my youth was to either remove the stickers and replace them in together OR pop the pieces out and put them back in the correct order. Go figure! My son has solved it quite a few times...but not after writing up his notes, watching some YouTube videos and reading some websites. And I thought he wouldn't be using his brain now that it's summer!
Interesting "Man" Fact #2 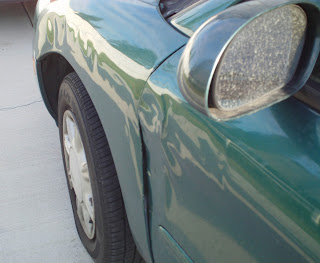 Appearance really DOES matter...but not in the way you think it would. What I'm talking about is the vehicle your man drives. Years ago I was driving my husband's car to work and due to no fault of my own, I was sideswiped. When my husband arrived on the scene I wasn't sure if he was more worried about me, his wife of many years, or his car. I do think I saw him shed a tear. However, the car was still drivable and thanks to the wreck the other guys insurance paid for not only this car (because it totalled it), but it paid for my car loan. Love it when an accident works out for the best. And now a few years later the car still runs just fine...even with over 200,000 miles on it. But my husband is constantly warning me that it's going to die any day and we'll need to buy another car....he's been saying this for the past 2 years. I finally called him on it. I asked him why in the world he says that when the car is running fine...well he admitted to me, "I don't like driving it with the banged up side." Apparently it's bothered him ever since it happened and he constantly worries about what type of image he has when he gets out of a banged up car. Go figure!

I'd love to know what interesting "man facts" you've learned over the years!! Please share by leaving a comment, I could use a laugh!

I learned that when my husband is hungry or sex deprived then he is not very happy. If those two things stay satisfied then all is right in the world!! Go figure!! Now delete this as soon as you read it... You know who I am!!

And I was going to think of something that a Man has taught me, but I think Anon above has just written the greatest comment ever written in the blogosphere (no greater truth either) and I am sure there is nothing more to be said.

So glad I visited today.