Best part of Monday's is they always end and Tuesday is just around the corner. 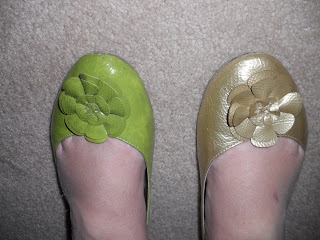 But you know, some Monday's are just like this. No matter how much you think you have it all together, you later find out that you didn't. If fact, the Monday this happened to me I had a meeting with some really cool people that morning and had NO idea my shoes didn't match. They were the same style and felt the same and obviously I don't ever look down.
It wasn't until a meeting a little later with a friend that she pointed out my mistake. I was beyond embarrassed. She was so nice and told me that it made me seem "more artistic." Whatever!
I just hoped and prayed that the people I met with earlier that day also didn't look down and notice my shoes. And they didn't...yeah. But then they admitted that the receptionist did notice and mentioned something about it. Let's hope she too thought I was being artistic.
So the moral of the story...first, check your shoes to make sure they match before you leave for the day and two, it's okay to keep your head UP and not worry too much about what lies below!

My mum always told me that the bigger the smile the thinner the hips... suposedly because if you put on a big smile, people should be so focused on your face that no matter what is going on below your neck it shouldn't be noticed. Hmmmm, good theory! Let's just hope you smiled allot that day. :) Oh, by the way, the shoes are totally cute.

Got to love that...just admit you were being artistic

Your friend was right. You were just being artistic. lol I have gone into town shopping and to the bank etc and someone finally mentioned that I still had my slippers on. That was embarrassing

I did the same thing one Sunday morning. I was to sing a solo, in front of the whole congregation and happen to look down while I was rehearsing on stage. I had a black shoe and a dark green shoe. . . but they were not the same style; just both flat shoes. I didn't have time to go home and change so I just went with it since everyone knew I had two little boys. Sunday mornings can be rough and I always try to check out the mirror now before I leave.