Every so often I am asked to create announcements or invites for special occasions. This past summer I've had the honor of creating wedding announcements for two special couples. The ones I'm going to share with you today were for my little brother and the love of his life. He found love again with an amazing lady and our family is over the moon happy for them both!! 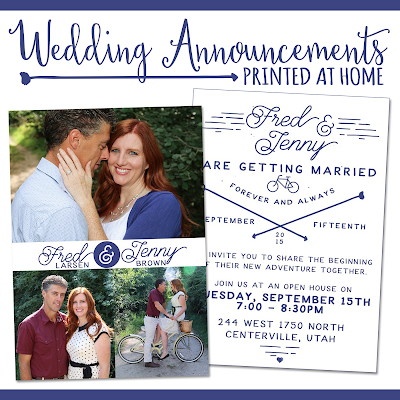 So the challenge with these announcements was I didn't have enough time to have them professionally printed. I was hoping for double-sided, but considering it was a holiday weekend and we needed to mail them in three days knew that wasn't an option. Luckily they only needed 100 announcements. So I assured them both that I could produce quality announcements at home using the following supplies: 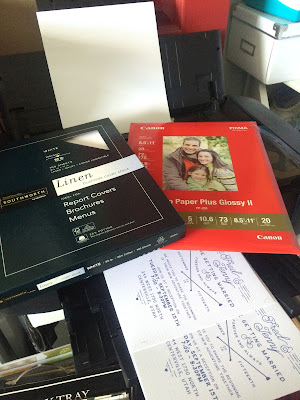 The challenge with any project like this is figuring out what the Bride (and Groom) would like. In my experience they either know "exactly" what they want...which rocks for me, I'm great and duplicating a style) or they have NO idea (which can be good too, so you can go with a design you like). But the key is asking for examples of invites they are drawn to...that way you can figure out the style they typically lean towards. Luckily this bride had an example and was pretty happy with ideas I gave showed her. 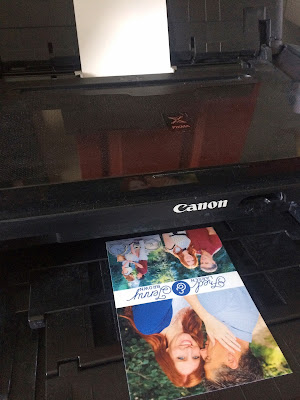 So once the design was approved, I could get to work printing. I formatted both the announcement portion and the photo to fit two on the 8.5x11" sheet. So after printing I simply needed to trim these down to fit the envelopes. You could also print the photographs out on 5x7" Canon Photo Paper Plus Glossy II photo paper since this amazing printer prints borderless.
Personally this style is so "now" and so something I would love to do more of. I love that these two let me include more then one photo on the 5x7" photo and also personalize it to match the announcement.And I love that with photographs being so much a part of our world right now that wedding announcements still include photos of the couple.....

....and I'm not talking about the photos like we did back in my day (one slightly formal photo included in an embossed invite) like mine shown here.

The project was a huge success and the announcements were mailed out the following Monday!

And they are living happily ever after!!

Very creative as well as beautiful. Your wedding invitation is not only beautiful even unique also. Just adorable. Thanks for sharing.