I have mentioned the following story to a few friends that have asked me to send them a copy and I thought I would share it with more of you by posting it on my blog. The story below was written by a dear friend of ours. He shared it with us for the first time when he was asked to speak in church while we were visiting his family in Canada. Still to this day it brings tears to my eyes. I know it's a long post, but if you have the time it's worth reading. Happy Pioneer Day to all our friends & family!!
"We’ve heard much about the Mormon pioneers of 1847 and their trek across the plains and entrance into the Salt Lake Valley.  Not surprisingly, as the pioneer theme is presented, each goes back in memory to his or her own family line.  There are usually examples to identify and which fit the definition of a pioneer: “one who goes before, showing others the way to follow.”  Some, if not all, made great sacrifices to leave behind comfort and ease and respond to that clarion call of their newly found faith.  The stories of death, suffering and sacrifice along the Mormon trail are legend among church members and the modern-day trek has become a pilgrimage for the thousands of Mormons seeking a connection to their pioneer ancestors.   If you take the time to participate on one of these treks, you will hear the ancestral stories that make the trail come alive.   On a recent visit to Nauvoo, I made my own personal walk down Parley Street to the banks of the Mississippi and gazed across the waters to Iowa thinking of the bone-chilling cold of that bitter winter in February 1846 when the saints would begin their exodus from their beloved Nauvoo and into the unknown mystery of the western frontier.  I took my turn with them and gazed back at the now beautifully restored Nauvoo Temple and thought of the symbol of sacrifice, dedication and obedience its very purpose had served.  Some 5,600 of them had received their endowments and helped establish the restoration of these sacred covenants in this dispensation.  What was missing for me was an ancestral link to this time in history.  I have completed extensive research into my Family History, but all my lines seem to take me deep into a history rooted firmly into Europe with no information even remotely rumored to be LDS.  When I received this assignment, I wanted to add a personal touch and share experiences of my lineage to help explore their sacrifices and personal suffering so that we would better understand the important aspects of the Lord’s plan for us.  I searched my ancestral files again hoping the Lord would slip something into my view that had been previously missed, but I could find nothing.  I had spent the better part of the evening with my research pondering and praying as I went, when a thought occurred in my mind that I actually do have a link.  I immediately made a phone call to a friend living 12 hundred miles away and indeed received confirmation that a link to these early pioneer does exist and he then proceeded to give me the base I needed to begin my research for this assignment.  I could not imagine the history I was about to unfold." 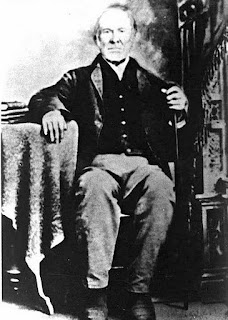