A couple of days after I was laid off from my job I received a call from a friend that works for the Church of Jesus Christ of Latter-day Saints video department. She told me they were looking for a "scrapbooker" to help create a scrapbook layout for them for a video project they were working on.
I was flattered and scared all at the same time when they asked. What a great responsibility to create a visual for one of my favorite talks given at General Conference back in April by Elder Richard G. Scott called "The Eternal Blessing of Marriage."
But I graciously accepted and prayed that I would know what to do that would convey the story properly. All I was given to help me with this project was the following portion of the talk:
"I remember one day I took some of those little round paper circles that form when you punch holes in paper, and I wrote on them the numbers 1 to 100. I turned each over and wrote her a message, one word on each circle. Then I scooped them up and put them in an envelope. I thought she would get a good laugh.  When she passed away, I found in her private things how much she appreciated the simple messages that we shared with each other. I noted that she had carefully pasted every one of those circles on a piece of paper. She not only kept my notes to her, but she protected them with plastic coverings as if they were a valuable treasure." (Richard G. Scott)
So I had no idea what Richard wrote to his beloved Jeanene that day, but I did imagine what I would want to hear from my sweet companion if he were writing the note. So I began punching circles and created the layout you see below (sorry it's a screen capture from the video). 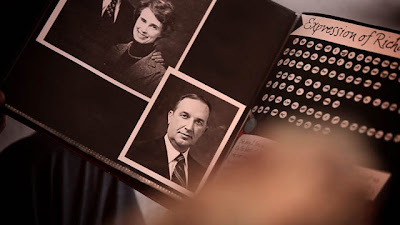 Well wouldn't you know it. I haven't liked my husband much these past couple of days since I returned home from a business trip. We have both been on edge with one another. Today we yelled at each other over cleaning up the house. But no time over the past couple days have I expressed my love for my husband...nope, not once.
In the talk, Elder Richard G. Scott says, "Express gratitude for what your spouse does for you. Express that love and gratitude often. That will make life far richer and more pleasant and purposeful. Don’t withhold those natural expressions of love."
So I did send him a text message telling him I was sorry and that I appreciated and loved him. Now here's the final video that was posted on lds.org. And yes, I sobbed through the entire thing because I knew its message was what I needed to hear and it was TRUE!

That is so awesome Lori...WTG