I am sure you're all wondering what happened to my Inspired by Pinterest show, right? Well we've had some production schedule issues that made it so the fun projects I filmed recently have been delayed another week. But no worries, we'll be back on track next week and you'll love what I've been crafting-up.

But I did want to share someone (not Pinterest) with you that INSPIRES me all the time. This is my teenage son, I think he rocks. He is very artistic, loves drawing, comic books and painting. He loves supporting local artist by being their screen t-shirts and prints. 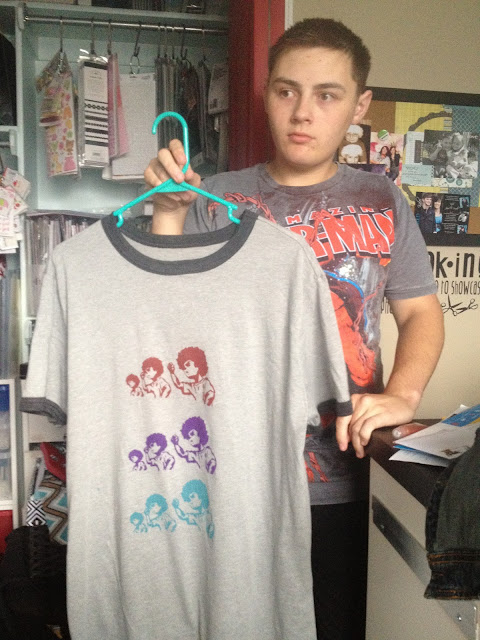 He mentioned that he would love to make screen prints that he could put on t-shirts or canvases and I made the mistake of telling him I owned a YuDu Screen Printing machine in the basement that I had never even taken out of the box. He proceeded to bug me for an entire month about getting it out. Well if you've ever seen the YuDu system you know it takes up a lot of space. I tried bribing him with cleaning up an unfinished room in the basement to set up the machine and work area, figuring he'd never do it. Well he did. I then told him that he could not use the machine until he watched a ton of how-to videos on how to do the YuDu, thinking he wouldn't do that either. Well he did. So after all that I finally set him loose on it and he spent a couple weeks at the end of his summer screen printing his own t-shirts. The one he is holding is one of his first. He drew the artwork with black pen on transparencies to create the image that he burned into the screen. It's very cool and I should have taken a better photo. But this kid ROCKS and totally inspired me this past week. He'd decided that he'll start making shirts for his friends and classmates (friends get a $5 off discount). I figured if he's not going to have a job, he might as well create one.